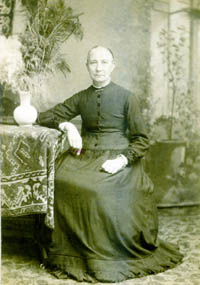 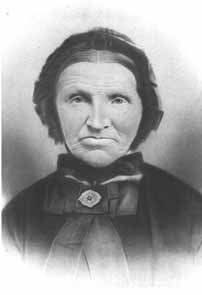 Note:
The following story has been passed down from different sides of the family.

Bertha's first husband, Claus Peter Schneider, was a gamekeeper for a member of royalty in Denmark. He came upon two men skinning a deer, and while he was confronting them, a third poacher killed him. Bertha remarried and her second husband Claus Göttsch took over the position of gamekeeper until Bertha's eldest son Ernst was old enough to take over the job.

As with all family stories, until they can be verified you must take them with a grain of salt.

Thanks to Howard Maahs, who has done extensive research on Bertha and Claus Peter Schneider, there is a grain of truth to the above story after all. Claus Peter Schneider was employed as a hireling or day laborer for the royal estate of Winning in 1837. According to parish records he met an unexpected and violent death on January 14, 1837. The records state "Claus Peter Schneider from Blankenburg (in the) parish of Moldenit. He died in Freymaurer Hospital. He allegedly left behind a wife and five children. Age about 40 years." This entry suggests who provided the information was someone other than his wife, Bertha.

A revised, more accurate version of the family story:

In January 1837, Claus Schneider, an agricultural laborer on the royal estate of Winning in the Duchy of Schleswig, happened upon some poachers who shot and mortally wounded him. Claus was taken to a hospital in the nearby city of Schleswig for emergency treatment and died later that day. Soon afterwards, Catharina and her five children relocated to Fiefbergen, Duchy of Holstein, and the village of her deceased husband's birth. Seven years later in 1844, Catharina and her four youngest children relocated to Denmark where she married her second husband, Claus Göttsch, himself a widower.

Family history tells that the Gottsch family resided in Davenport, Iowa for a short period of time. After buying land in Washington county around 1858, they would commute back and forth. The land in Washington county was tree less, so wood would have to be cut in Fort Calhoun and carried back to the farmstead. The first year the family planted rye, and ducks ate all the seed. The family then obtained more seed from the Army encampment (known now as Fort Atkinson) that was located by the farm, planted the seed, and then dragged a tree across the land to make sure the ducks would not eat the seed again.

The following is an article printed in the Blair Pilot on 29 August 1878.

Died: GUTCH (sic) On Friday, August 23, 1878, at his late residence near Ft. Calhoun, Mr. Claus GUTCH (sic), age 77 yrs, 11 months and 20 days. The subject of the above notice was highly respected by all who knew him. The procession, it is related to us, was more than a mile in length and the large concourse of people who followed the remains to their last resting place in the Fort Calhoun Cemetery is an indication of the esteem in which he was held by his neighbors far and near. Mrs. Gutch (sic) is still living and is surrounded by a number of her children who will spare no effort to comfort her in her bereavement. Mr. Heinrich Schneider was a stepson of Mr. Gutch (sic), and several of his own sons, Charles and Peter known to us personally, live in the neighborhood. The funeral services at the residence were performed by Rudolph Peters. Esq., while Rev. J.P. Andrew officiated at the grave. The funeral was said to have been the largest ever witnessed in the county. (Note.. the body of Claus Gottsch was later moved to the German Cemetery, where both Mr. and Mrs. Gottsch are buried.) The headstone at the cemetery reads "Clouse".

Bertha Catharina Jöhnk and Claus Göttsch had the following children:

NOTE:
It is at this point that the descendants of Bertha Jöhnk split into two separate families. To continue the Jöhnk family genealogy, you must go to the Third Generation of the Schneider Page (see link on front page), and Fifth Generation of the Gottsch Page.