Hannah Timperley had the following child:

Hannah Timperley and Thomas Monks had the following children: 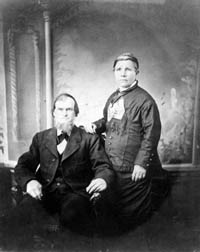 He married Mary Ann Mitchell in Illinois on April 8, 1844. Mary was born in Yorkshire, England August 31, 1827. Mary was the daughter of Unknown Mitchell and Mary Greenwood. Mary died July 3, 1911 Omaha, Nebraska, at 83 years of age. Her body was interred July 1911 in Omaha, Nebraska Mt. Hope Cemetery.

Joseph Smith a member of the Latter Day Saints bought land in Navoo, Illinois from John Timperley, and that they, John and Mary Ann, were basically chased out of Utah by the "avenging angels", all the way to Scottsbluff, Nebraska.

(Note: Mormons indulged in the heretical doctrine of Blood Atonement which denies the Almighty efficacy of Jesus Christ's sacrificial death at Calvary. The "Death Society" - which carried out killings in the last century - was also known as "Daughters of Gideon," "Avenging Angels," "Destroying Angels," or, in Brigham Young's reign, as "Sons of Thunder," "Sons of Dan," or "Danites")

Another story from Richard, that once John Timperley ran into some Indians, and the Indians would often ask for a gift to let people pass, and John held out Sarah (jokingly?) as his gift, but the Indians didn't want her!!

The following taken from a compilation of Timperley history by E.H. Timperley, Heavener, Oklahoma.

"John Timperley and Mary Ann Mitchell were born in England, came to the United States and were married in Illinois, Then they left their home and went to Utah to live on account of his health, They lived with the Mormons there for sometime. Then they traveled to Florence, Nebraska, in wagons wintering there, Then they preempted their home of 160 acres paying $1.50 an acre north of Irvington in Douglas County, where they spent the rest of their lives."

The following historical article was written by one of the real pioneers of this locality, Dr. Frank B. Hibbard of Irvington. His articles were compiled from data he has kept since he came here, and are reliable.

"In the spring of 1857, John Timperley and Charles Noyce, with their wives and children came back from Salt Lake and settled upon homesteads, where they lived until their death. These two families passed through great hardships.

Mr. Timperley came from England and remained in Illinois for a short while and in 1853 went to Salt Lake, before many had made settlement in Nebraska. Mr. Noyce came direct from England with a company of Mormons, getting acquainted with his wife, who was in the same company, while enroute to Salt Lake. They were married and after a short period in Salt Lake the acquaintance sprang up between the families of Timperley and Noyce and as both were dissatisfied with their conditions they made arrangements to leave.

Conditions were such at that time that it was very dangerous to those who were desirous of abandoning the Mormon church and all sorts of subterfuge had to be practiced to avoid trouble in returning. They were both in the rescue party that went out from Salt Lake to succor the "push cart train" that was caught in the snow storm before reaching Salt Lake and claim they found suckling babes wrapped and held by their mothers alive, although the mother was dead.

Mr. Timperley having some extra funds settled on the land and remained there until death. Both Mr. and Mrs. Timperley were possessed of characters that were full of courage to battle with frontier life. Mrs. Timperley acted in the capacity of midwife for this section, I will just relate one occurence, where she was a good collector for her husband. One bitter cold night she was called and asked to attend a case. Mr. Timperley went to the door and it proved to be from one who had been owing a debt to Mr. Timperley for a long while. When he asked for Mrs. Timperley’s acceptance Mr. Timperley said to the man: "We would be pleased to have that debt settled before giving further credit". It was an emergency case, and the debt was paid."

John Timperley and Mary Ann Mitchell had the following children: 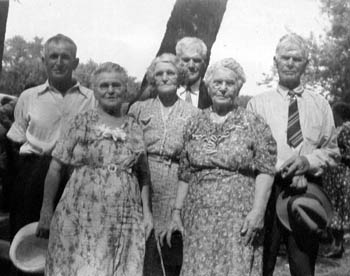 She married Foster Greenwood in Warsaw, Hancock County, Illinois on March 6, 1846. Foster was born in Heptonstall,Yorkshire, England January 7, 1822. Foster was the son of William Greenwood Sr. and Sarah Utley. He married Mary Madeline Rosen in Utah on October 24, 1872. Foster died February 16, 1900 in Union, Utah, at 78 years of age.

Mary Timperley and Foster Greenwood had the following children: